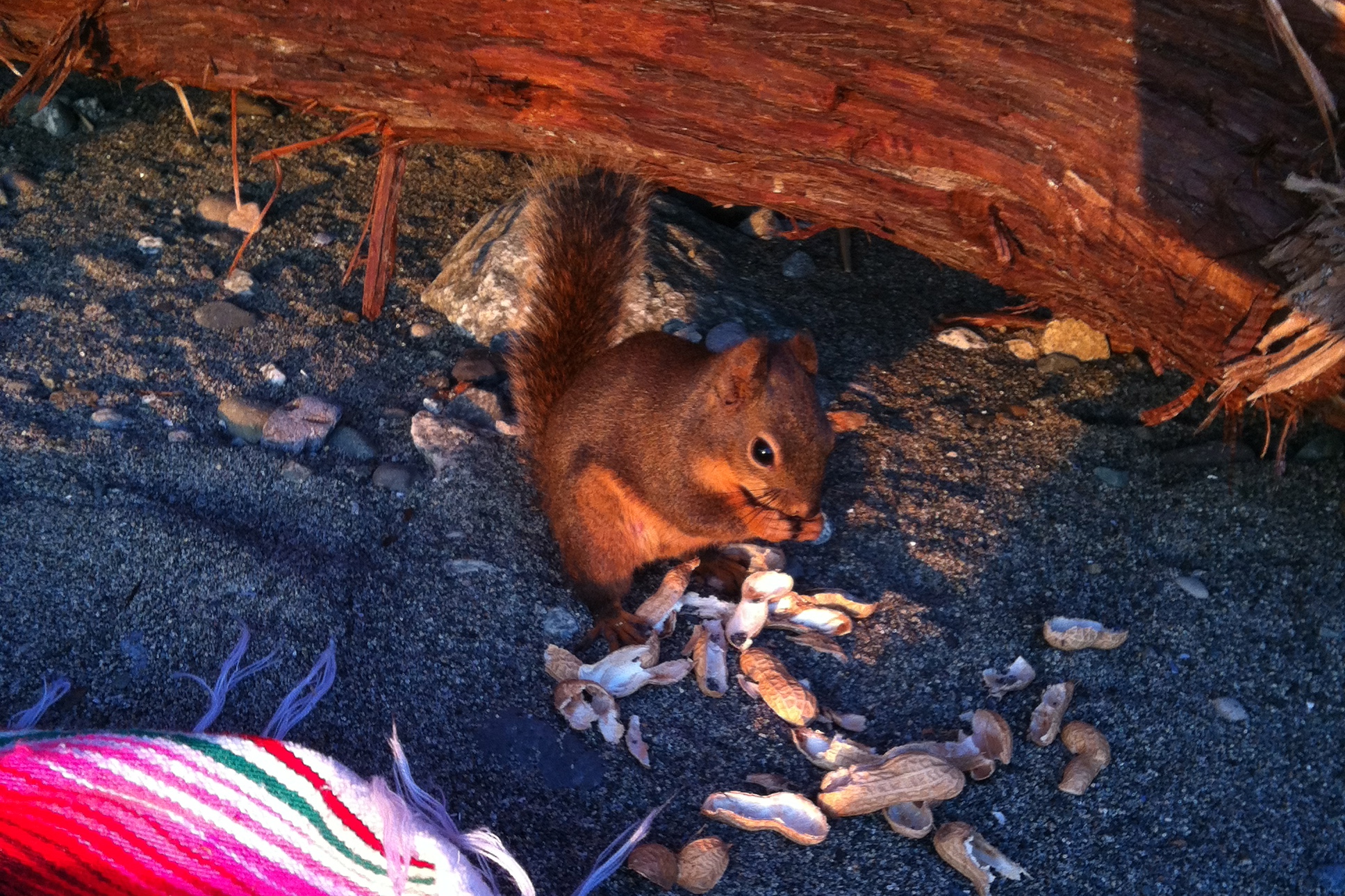 Native Red Squirrel, threatened in some areas by the Eastern Grey Squirrel, is smaller and has a sleeker tail

Have you ever woken in your tent in the night to the sounds of small feet scurrying just a few feet from your sleeping bag? Nighttime interruptions can cause panic, especially if your imagination is as colourful as mine. Knowing what small species you are likely hearing may help you sleep better at night… and may also give you some happier wildlife identification moments the following day! Native Red Squirrel, threatened in some areas by the Eastern Grey Squirrel, is smaller and has a sleeker tail

Our smallest furry neighbours are shrews, moles and voles. These species tend to burrow in small tunnels in fields. Though you may spot small holes in the earth that indicate a network of tunnels underfoot, you may never see the creature who created them. These small mammals tend to scatter quickly at the sound of approaching footsteps. If you see owls or hawks overhead, you’ll know what they are hunting for! Eastern Grey Squirrels are common in BC’s Lower Mainland and Victoria, are grey or black, and have a large bushy tail species of squirrels and chipmunks are found throughout British Columbia. In BC’s urban areas such as Vancouver and Victoria the Eastern Grey Squirrel (which can be grey or black) is an invasive species and about twice as large as the native Red Squirrel.  In old growth forests, a Douglas Squirrel sighting is a special treat.  If you know what species you are looking for, listen for the calls of squirrels to help you identify them. Many squirrel calls can be heard online before you head out check out – http://www.soundboard.com/sb/Squirrel_Sounds Raccoon in the Campsite

In many suburban and semi-rural campgrounds, rabbits are an aggressive invasive species. Though timid, they can often be seen in grassy areas.

In many areas in BC, you may also find yourself sharing camp with raccoons. They are usually nocturnal so if you have coolers please lock them away as raccoons are always on the look out for a quick, easy meal!

If you are camping anywhere near beavers, you will see the evidence long before you spot an actual beaver. Tell-tale chewed rings around trees, and fallen trunks that make up the beavers dam, are easy to spot. If you take your time it won’t be long before you spot the beaver, who, though timid, is often an industrious worker.

And if you are on Vancouver Island, be aware of the possibility of an extremely rare sighting of the endangered Vancouver Island Marmot. Its numbers are now very slowly growing due to recovery plan and the help of outdoor enthusiasts and wildlife biologists.

Always follow wildlife warnings and advisories, and learn how to tie up food stores in a tree – away from camp – to protect both humans and wildlife.

Amy Clausen is an avid camper and the blogger behind ladycamping.com. She is an arts and outdoor educator, and a UBC student. She hikes and kayaks with her family, and enjoys road trips to historic BC towns. She lives in beautiful Port Coquitlam with her partner and young child.