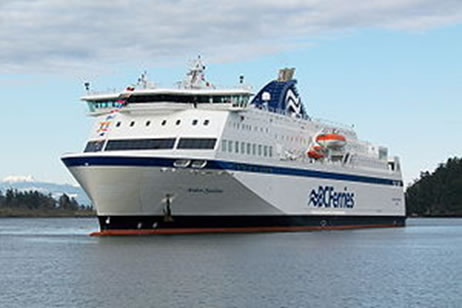 The BC Ferries Northern Adventure is certainly classy and well equipped. The cost for a regular car is $469 in peak summer, plus $206 for each passenger (including the driver).

This was a very early start—I needed to be at the dock in Prince Rupert at 5:30 am for a 7:30 departure. After loading on the car deck, I went to the passenger deck and decided to have a good buffet breakfast in the Coastal Cafe, which offers an excellent choice of hot foods, fresh fruit, juices and hot drinks.

As the ship sailed there were several great views of the harbour activity. I found that there were staterooms equipped for the 16 hour trip, but I decided to buy a $35 reclining chair in The Raven Lounge at the prow of the ship in a peaceful area with an 180 degree view. I travelled most of the trip with camera in hand and got some excellent shots. I enjoyed the Pacific Buffet for a light lunch and an excellent salmon dinner.

The route took us along a series of beautiful forested fjords that were sometimes only one to two kilometers wide. There were many spectacular waterfalls from hanging valleys formed during the last ice age that fell directly into the sea.The captain pointed out sea life near the ship  and there were recorded announcements of many points of interest, such as historic canneries and mills.

A real bonus was meeting a number of world travellers. I was able to have a great conversation with a Swiss father and son who were bonding by exploring British Columbia. The ship stopped in Bella Bella harbour before continuing south through more open waters; it felt like a genuine sea voyage on this section of the trip.

The ferry arrived in Port Hardy on time at 11:30 pm. The ease of loading and unloading as well as the scenery and on-board amenities made this an excellent choice of BC travel.