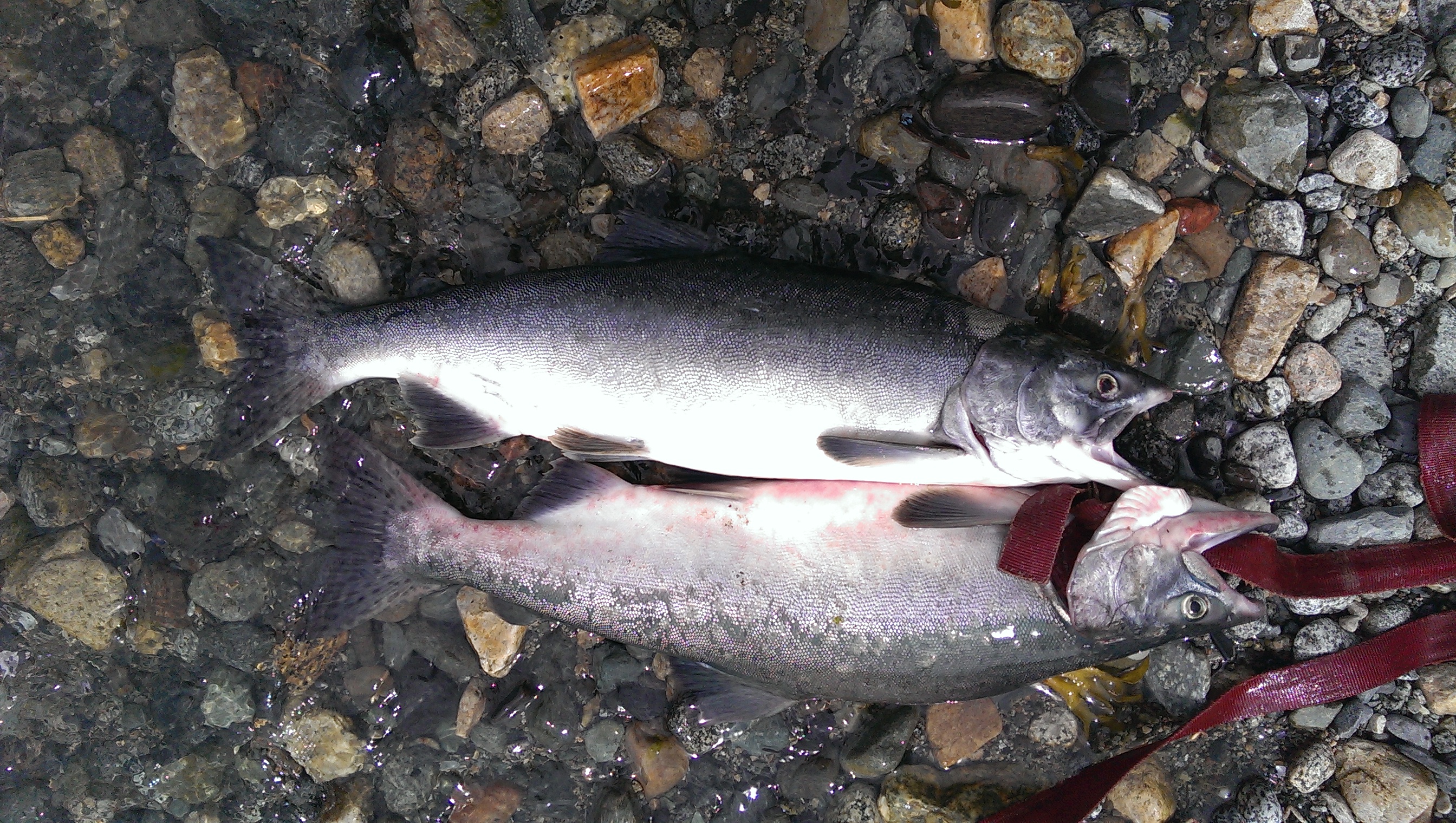 I have been hooked on fishing since a young age, when I use to fish the creeks and oceans of Cornwall, England. Now I live and work in Canada and fish annually for salmon, unfortunately as work permits.

Every two years in the odd year (2013, 2015 etc.) the Pink salmon phenomenon occurs in Southern BC. Large numbers of Pinks (as they are affectionately known) approximately 10 million, or Humpies as they are called by some as the males grow a hump on the back, return to the rivers such as the Fraser and smaller tidal rivers such as the Squamish to spawn.  These salmon swim in large schools and are relatively easy to catch from the shore by all ages. They generally range in size from 3 to 7 lbs and put up a reasonable fight on light tackle.

Steve and I, (the one in the photo up to his waist in water) go fishing together four or five times annually, usually fishing on the tidal portion of the Fraser River for various salmon species. This year with the Fraser River closed in mid August 2013 to protect the Sockeye salmon run we detoured up to Howe Sound and Furry Creek.

Furry Creek is located just north of Porteau Cove and before Squamish on Highway 99 also known as the Sea to Sky Highway. Parking on Hwy 99 South Bound we walked across the Furry Creek golf course trails to the waters edge approximately 500 meters.

Arriving around 11:00 am there were a number of fishers already on the rocks or up to their waist with waders in the sound. Our equipment of choice was waders, a spinning rod medium fast action 10 foot in length, a spinning reel with 10 lb mono line and pink lures.

The Pink salmon are attracted to pink lures we were using Gibbs Croc spoons with a single barbless hook (size 1/0) visit https://www.gibbsdelta.com/product/gibbs-croc/.  Others on the shore were using buzz bombs or pink wool flies. Everyone was hitting fish when we arrived.

On my first cast I had a fish on but it outwitted me!  Not to worry on the third cast I had another strike and landed a Pink salmon.  It hit at the end of the retrieve so I only had six feet of line out and it was a tug fest as I had failed to set my drag!  The water is not clear and you cannot see the fish so be prepared they can strike from the moment the cast hits the water to the last part of the retrieve.

When there is a Pink salmon school, everyone hits fish but when the school passes enroute to the breeding ground the action can be very quiet, as people cast and retrieve in anticipation of the next bite.  During the day from 11:00 am to 5:00 pm I had 8 strikes (with a single barbless hook you need to set the hook), four fish on and only landed two.  The barbless hook gives the fish a fighting chance and tests the mettle of you the fisher.

Steve Up to His Waist in Howe Sound

The technique is to cast out the lure and retrieve very and I mean very slowly, often the slower the better. At times the lure bounces on the bottom and can snag – I lost two lures this way! These lures cost $4 to $5 each but fortunately mine were from the 2011 season, a season I did not lose a single lure.  I also had an accident with my rod when I caught my first fish, I far too aggressively and excitedly threw the rod down on the rocky shore to beach rather than net the Pink salmon and this action broke the tip off my rod. Fortunately I had a spare rod in the vehicle so switched rod, I always bring a spare rod and reel for such an equipment failure occasion.

Once a fish is hooked the task is simply just to play them for a few minutes to tire them enough to land. Often they jump and run line hence the reel drag to break the force of the run. Let the rod do the work and keep the line taught or the fish can spit the hook. The technique on a shallow shoreline is to walk them into the shallows to beach them rather than netting. Fishing from rocks netting is advised hence it is good to have a partner.

Once on shore it is best to quickly kill the fish with a swift blow, then to immediately bleed the fish by cutting the gills. Next I attach the fish to a fresh line that is kept in the water to preserve the fish at a cooler more natural temperature than on the bank.

Steve and I caught three Pinks in total on the day (the limit is four per person but in six years of fishing for Pinks I have yet to hit the limit). All the fish I catch and keep are for eating. With Pinks I like to fillet the fish (remove the stomach and pin bones) and smoke using Steve’s secret recipe.  One of the three fish was a female salmon so we kept the egg roe which we preserve for our annual October bar fishing trip when we fish for Coho salmon.

Pinks will be running in the Fraser River from late August to the end of September. I like to fish in the tidal portion (I like them fresher and less humpy), however many prefer to catch them in the rivers feeding the Fraser such as the Vedder or Harrison where numbers are greater.

Joss has been employed by the BC Lodging and Campgrounds Association since 1988 and held the position of Executive Director since 2006. Over the past 29 years Joss has been involved in many of the provincial processes that have shaped the tourism product in British Columbia. Joss has a keen interest in the outdoors enjoying running, fishing and camping pursuits.