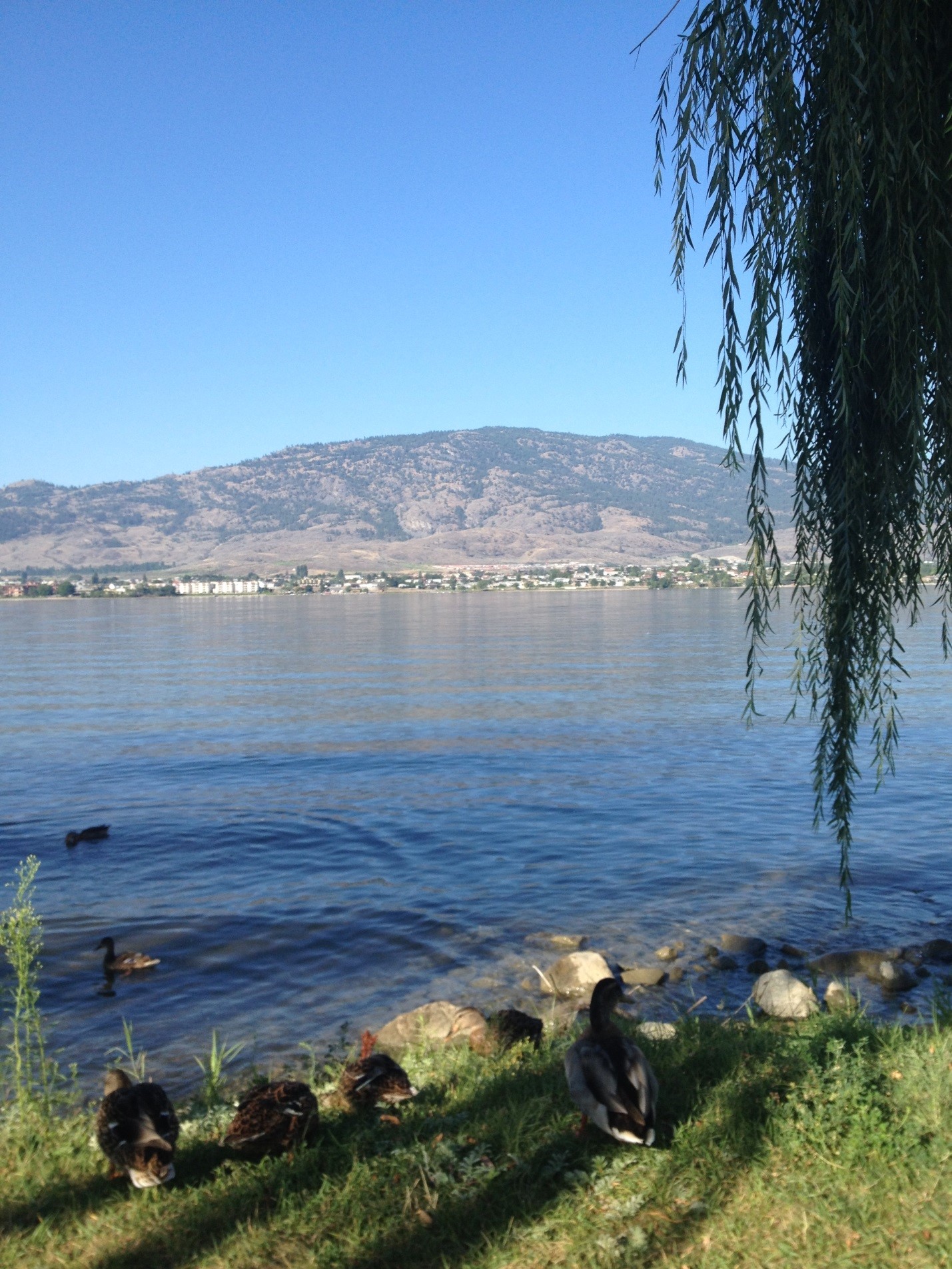 View across the lake with Ducks

Leaving Sunshine Valley Resort, we headed east along Highway 3 towards Osoyoos and quickly entered Manning Park. This was day 2 or our circle tour looping up to Nakusp Hot Springs taking Highway 3 and then Highway 6 to Nakusp and Hwy 6 back to Vernon before running down Highway 5 to Merritt and home on the Trans Canada Hwy1 to Port Moody.

On the road from Manning Park

EC Manning provincial park is spectacular it spans over 70,000 hectares and features a number of Provincial BC Parks campgrounds as well as Manning Park Resort. We stopped at the resort to use the facilities, grab a coffee at the Cafe and caught a glimpse of the ground squirrels that burrow in the banks. We also took a short side trip up to the lookout – approximately 15 minutes there and back – that has great vistas of the Cascades, alpine meadows and if you are lucky, you can spot the marmots and see Whiskey Jacks – these birds are extremely curious and can be coaxed to land on your hand for food scraps!

experienced hiker, while we did not have time to walk any at this time, we did take note of the following trails for future adventures: Beaver Pond Trail; Canyon Nature Trail; Rein Orchard Trail; and Spruce Bay Beach at Lightning Lake.

While driving through the park we kept a watchful eye for deer and black bear which can often be seen roaming the verges of the road. We did spot a few Whitetails.

We drove to Princeton, nestled in the foothills of the Cascade Mountains and the heart of the Similkameen Valley, which is the junction of the Tulameen and Similkameen rivers.

The town has a number of old buildings and the Princeton Museum offers an impressive art, mineral, clothing, and local pioneer furniture collection, as well as fossils, a butterfly collection, dinosaur bones, First Nation’s artifacts, and much more. We also, took the opportunity to stock up on supplies at Coopers Foods and purchased a Subway sandwich to share for the upcoming leg of our journey.

Next, we headed on Highway 3 to the town of Osoyoos, the drive is spectacular and there are a number of pull outs to take in scenic views of the Similkameen River and of course the valley overlooking Osoyoos. Along the way stops can be made at the communities of Hedley and Keremeos (Keremeos is a town of fruit stands).

We headed through Osoyoos to the east side of the lake and we had dinner, an impromptu pasta, with friends near the eastern valley viewpoint. Then back down the switchbacks to camp at Nk’Mip RV Park and Campground where Katrina the host welcomed us at around 8:20 pm. Katrina directed us to set up camp in site 168 on the edge of beautiful Osoyoos Lake. The campsite looked west and afforded a great view of the city, which later on twinkled in the night sky, a cool breeze made sitting in the desert evening air pleasant as we relaxed after a long travel day. Nk’Mip campground is located at the south end of the Osoyoos Indian Band’s land, NK’MIP Resort encompasses over 200 acres of the ‘bottomland’ (NK’MIP). “NK’MIP” in the Syilx language refers to the area at the north end of the lake where the mouth of the lake meets the Okanagan River. The campground has over 400 full services sites although a number are smaller than most modern RV’s need. We found the washrooms to be super clean and the staff friendly.

As usual, we got chatting with the neighbours just as it got dark, they had rented an RV already set up on their site for a little over $775 for the week and driven from Calgary. Given that, and the nightly site rental fee, and that there were six in their party – it was a good deal and the savings on fuel were considerable. After a few libations and swopping RVing stories we brought out our glow in the dark bocce balls (Playaboule from Switzerland) and played until 11:00 pm. It is amazing how gregarious campers are, always willing to chat, share a beer or wine, and tell you interesting things!

Day 3 of the tour and in the morning the sun shone, the temperature rose and the willow tree at the bottom of our site, on the waterfront, offered some much needed shade as we read a couple of books and watched people playing in boats.

View across the lake with Ducks

Suddenly there was a swooshing sound and an Osprey pounced and carried a fish in its talons. Another Osprey attacked the fish carrier and the fish dropped into the lake. A small boy from a neighbouring campsite paddled out on a paddle board to claim the fish prize. Next we were visited by a number of friendly ducks seeking food grazing on the bank.

Around 11:00 am we met up with friends and took a trip to the Platinum Bench Winery with Bread maker in the background

Osoyoos Visitor info centre and then a whirlwind tour around two wineries. The first one was Nk’MipCellars and while there we sampled some white and red wine and witnessed an explosion of champagne bottles in a display cabinet (must have been the heat). We purchased three cases of wine between the four adults and bought a bracelet and the turtle bead from Beadtrails. On to the next tasting at Platinum Bench, near Oliver, there is an onsite “Bread Artist” who made fantastic breads to pair with each of the six samples. Be it said we waited the 45 minutes needed to take fresh baked bread with us.

Trek to the Beach at Osoyoos Lake

The rest of the afternoon was spent on the beach at Osoyoos Lake at a friend’s parent’s apartment where our friends were staying. A small trek down the path to a private beach on the lake and a pool. A great way to keep cool on a hot afternoon. After which we went to dinner on the main drag at Ella Greek and Mediterranean Grill the food was reasonably priced and good quality (we had wanted to eat at Campo Marina Italian Restaurant but it was closed Monday’s even in summer!).  Returning to the campground for wine and a snack we again played night bocce with the neighbours, tomorrow is a new adventure.

In the morning of our 4th day we spent some time to peruse the Osoyoos shops for great finds. As well, now hooked on the beads, we stopped in at the Gallery to obtain another bead – an artist easel. Collecting the beads along the Beadtrail is a fun and interesting way to see the sights/attractions in the southern Okanagan. Next the scenic drive to Christina Lake.

PoMoDee (Darlene) is the Social Media Coordinator for BC Lodging and Campgrounds Association managing platforms such as Facebook, Twitter, Instagram, YouTube, Pinterest and Google + for Camping and RVing BC Coalition and Travelling in British Columbia. Darlene was born and raised in British Columbia, where she currently resides in Port Moody. Darlene calls herself an avid camper, who has been camping since the age of two and still enjoys the serene setting of a campsite. Interests include crocheting, crafting, photography and anything beach!