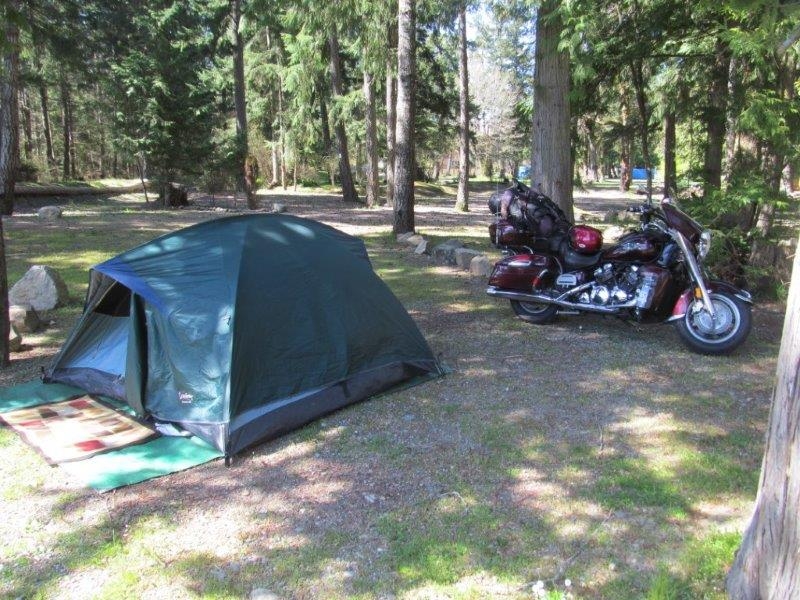 Motorcycle camping and touring is increasing in popularity but like RVs it’s great to do an overnighter as preparation before the longer tour.

When spring arrived last year I thought it would be a good idea to do an overnighter on our motorcycle in preparation for a two week trip across Canada that my buddy Bruce and I had planned for June.

It was still April and a little cool at night and definitely early for camping but undaunted we headed out to Parry’s Park in Parksville on Vancouver Island to check some new camping gear out including Bruce’s new CB rig and my new queen sized air mattress. I was tired of waking up on the cold hard ground every morning.

Bruce had recently bought a mint ’09 Suzuki Bandit – a great touring rig. My trusty ’06 Yamaha Royal Star Venture was the ultimate touring machine and my cargo trailer allowed me to carry all the necessary cooking gear and cooler.  We were going to be self-sufficient all the way, but we needed a shakedown trip.

The early April weather was spectacular with bright sun and light winds so when we rolled into Parry’s Park we both looked forward to setting up camp and sitting in front of a blazing campfire.

I’ve been going to Parry’s since my son was a little guy in the early ’80s. The facility is family friendly and geared to kids, with a pool, rental bikes, and the meandering Englishman River providing a small sandy beach so they can paddle around with their air mattresses. Approaching the office, we noticed the sign that read “Open May 1”.   Wow, were we screwed or what? Looking around we noticed someone working in the washroom/shower area so we approached, who we later found out was the proprietor – a more gracious and hospitable person you couldn’t hope to find.

He allowed us to set up in the closest campsite to the river and provided a picnic table from the stack which had been stored for the winter then rode in with a bunch of firewood. There was a flush toilet and wash area facility near to the river so no shaky flashlight, midnight hikes were required.

The tents went up, the new air mattress was inflated (damn, that’s a comfy looking sucker) the lawn chairs set up by the fire ring and my trusty Coleman stove, complete with stickers from the 1966 Mosport Canadian Grand Prix, warmed up the night’s gourmet dinner of smokies. Once dishes were done, we wandered around the deserted campground and I was able to fill in some of the local details for Bruce, showing him where people park their trailers for the summer as I pointed out a couple of semi-permanent verandas and BBQ areas. Mostly, though, we simply drank in the beauty of the expanse of lawn and canopy of mature trees. Long shadows from the setting sun on the grass made it look like a set from “CSI Miami”.

Soon, we put the firewood to good use and had a blazing fire going which lasted well past our bedtimes and we finally turned in at 11 o’clock after solving the world’s problems and ensuring that the fire embers were good and out. Yeah, it was cool that night but the full moon lit things up like a ghostly noon hour and the river sang us a song just like momma never did. That extra blanket from my old truck sure helped too.

What a great sleep on that new air mattress!! I slept in ‘til 8 and found that Bruce had already been up at 6, wandering up and down the river, getting the lay of the land. We had seen a fly fisher last evening just upstream which was fitting – the river was perfect for it, bubbling over the rocks with plenty of pools where the rainbows can gather.

Camp breakfast consisted of camp toast (you know you love it – burnt on both sides), Starbucks coffee, fried eggs and chili. The remainder of the firewood provided the perfect smoky atmosphere to kick back and reflect on the previous perfect night in a beautiful, peaceful setting.

Even when this place is wall to wall full, you can expect nothing but the best at Parry’s Park, off Martindale Road, in rural Parksville, British Columbia.

Started my camping pastime at turn 2 at Mosport with the lure of free firewood, beer fuelled evenings and the snarl of racing engines just outside the tent. After 38 years in the ambulance business, I retired to my pleasure pastime which was motorcycles and made a business out of writing travel and camping articles for Canadian Biker magazine for the last 10 years. My only claim to fame is the 1975 Ontario Class 1 Ice Racing championship. My poker and fishing skills are sketchy. This year, I'm clebrating my 40th year with my babe wife, Anne.