A Trip Through the Stunning Fraser Canyon, British Columbia

According to Wikipedia the Fraser Canyon is “an 84 km landform of the Fraser River where it descends rapidly through narrow rock gorges in the Coast Mountains en route from the Interior Plateau of British Columbia to the Fraser Valley.”  For Suzan and I it is a beautiful place to drive through enroute to the interior of BC. The Fraser Canyon starts after approximately a two-hour drive east of Vancouver, and in my opinion begins with the municipality of Hope.  At Hope you leave the freeway taking Highway #1 and the gateway to the Fraser River Canyon.

Hope was once a fur trade and gold rush town but now celebrates its connection with forestry and wildlife. It has become known as the “Chainsaw Carving Capital” with 20 giant wooden sculptures scattered around town.

Highway 1 follows the scenic Fraser River through the Canyon which has served as a key transportation route since the late 1850s when thousands were chasing gold using boats and pack horses in a rush that would end in Barkerville, hundreds of miles and many days away in the Cariboo.

Just north of Hope the broad Fraser Valley narrows to a deep, constricted canyon. The drive is stunning, with steep rock faces of the Cascade Range on both sides, split with numerous high waterfalls.  As the canyon narrows even more, we reached the hamlet of Yale, which, 160 years ago, was the furthest that steamships could reach from the coast.

As we looked around this very narrow bench it was hard to believe that in 1858, during the gold rush to Barkerville, there were 10,000 people in this staging area that is now a small village crammed between the river and cliff face.

We decided to check out the excellent Yale Historic Museum and St. John the Divine Church to learn what life was like 160 years ago. Information on Yale can be seen at http://historicyale.ca and it is definitely worthwhile exploring via the local walking tour.

One of Seven Tunnels on Hwy 1 in the Fraser Canyon

As we drove further up-river, we entered the first of seven tunnels bored into the Coast Mountains that takes the highway through the rugged canyon. The tunnels are named after the adjacent geographic locations, such as Yale, Saddle Rock, Sailor Bar and Hells Gate.

A few kilometres northward the highway crosses the Fraser River, heading to a popular feature of the Canyon, Hell’s Gate. Just north of  Hell’s Gate  is the narrowest section of the Canyon, Boston Bar and its sister village North Bend. Both of these communities are engaging stops to explore the more recent history of the Fraser Canyon. 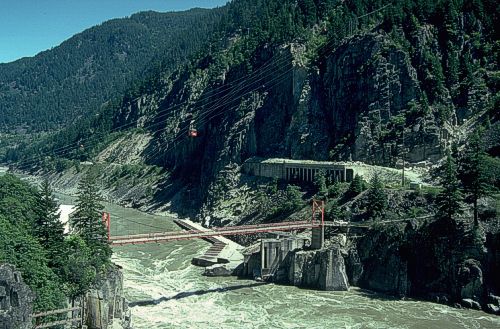 I am a railway enthusiast, so I like to stop and explore the communities where rail was a driving force of development. Boston Bar, even though it was constricted on high and narrow bench land far above the Fraser River, is dominated by a wide railway yard, with several locomotives and trains awaiting new crews.  When the Canadian Northern Railway was constructed here in 1917, the Boston Bar railway yard was the designated divisional point where train crews from Vancouver and Kamloops were changed for the onward journey.

North Bend, located on the west side of the Fraser River was established in the 1880s. Until 1940 there was no connection between the two communities.  Then an aerial cable ferry was built that could carry one car at a time; it has been saved and can be seen in Frances Harrington Park in Boston Bar.

As we drove across the two-lane bridge, which was built in 1985 to replace the aerial cable ferry, we were greeted with magnificent vistas of the river both downstream and upstream! North Bend was an unexpected find with remains of several of the original buildings established when the Canadian Pacific Railway was constructed in 1884-5. Bunkhouses, a hotel and restaurants were constructed for the crews and passengers. This was considered a great railway getaway location before the highway was upgraded.

From North Bend you can follow the Fraser River along West Side Road and explore the beautiful Nahatlach River valley as well as the pastoral farmland right in the heart of this deep gorge.  West Side Road leads 18 km (11 mi) up-river from North Bend to the Nahatlatch River Bridge. Short trails descend to the river. If you explore the south side of Nahatlatch below the bridge, you’ll find open spots for fishing and backwater pools for swimming. Our drive and frequent stops were a peaceful interlude off the busy highway.

As we headed back to Highway 1 we noticed that the forest was quite different from the coastal areas due to substantially less rainfall.  This section of the Fraser Valley is the beginning of a rain shadow created by the Coastal Mountain range.

Back at North Bend we headed over the bridge to Boston Bar to rejoin Highway 1 and continued our travels north. We were definitely entering a much drier climate and as we headed north east the trees changed to Ponderosa Pines, typical of dryer warmer climates, and where the Fraser Valley becomes almost semi-desert as we approach Lytton our final destination of this trip.