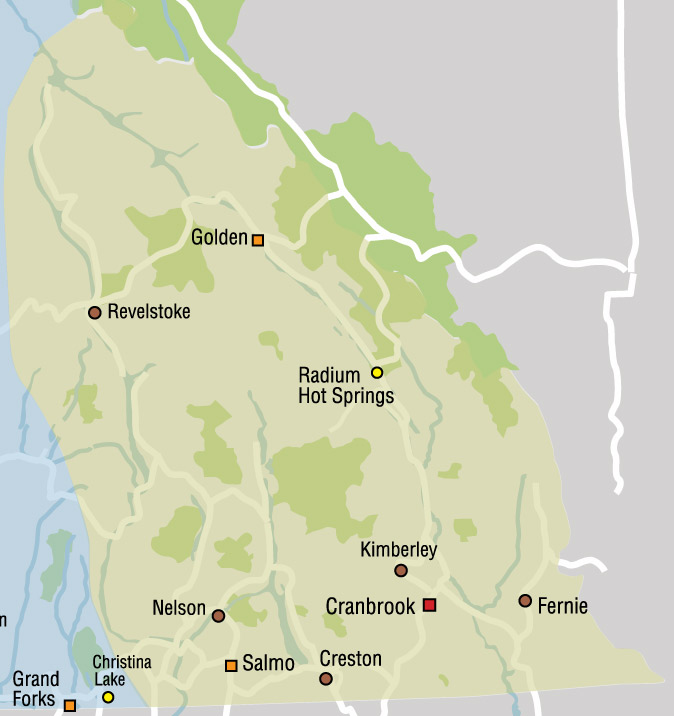 The best way to describe the Kootenay Rockies is as Canada’s most stunning mountain scenery. Year after year, visitors are dazzled by the enormity of the mountains that rise from the region’s valleys. The sensation of gazing up at these towering glacial peaks is humbling. Even those who are well-travelled are unable to experience the Rockies without being touched by a sense of awe.

The Kootenay Rockies region stretches from the Okanagan Valley in the west to the Alberta border in the east. The British Columbia provincial boundary is the continental divide where water to the west flows out to the Pacific, and water to the east flows all the way to the Atlantic. The region has four mountain ranges: the Selkirks, Purcells, Monashees and the Rockies. A map of the Kootenay Rockies immediately shows several Provincial and National Parks that dot the region including Glacier, Mt. Revelstoke, Yoho and Kootenay National Parks. It’s in these areas of mountain wilderness that visitors will find the most spectacular, and protected, scenery in the province.

The Arrow Lakes & Slocan Valley is home to tranquil valleys that are remote and sparsely populated. This was not always the case when in the late 1800s prospectors flocked here from all over North America in search of rich mining claims. Only a few made fortunes however but the mining legacy is evident all over the region in charming small towns and villages that are built in the valleys of the Selkirk mountain range. The Arrow Lakes owe their present size to the Hugh Keenleyside Dam near Castlegar. Prior to 1969, the Arrow Lakes were two smaller lakes joined by a 32 km (20 mi) river. The Arrow Lakes run from Revelstoke in the north, south to Castlegar and are the main drainage system for the west Kootenay. This is angling country. Lakes large and small are teeming with rainbow and cutthroat trout, Dolly Varden, and kokanee. Two different ferries cross Arrow Lakes. The Upper Arrow Lake Ferry travels from Shelter Bay and Galena Bay connecting Highway 23. The Lower Arrow Lake ferry crossing is the Needles Ferry that connects Highway 6.

The Slocan Valley exploded in the 1890s with the development of silver and lead mining and communities like Slocan, New Denver, Silverton and Sandon sprang up. Mines were worked until high production costs and low ore prices ended the boom. Rail lines from the north and south connected with steamboats plying Slocan Lake that created a vital link in the region’s transportation network. The last train traveled the Slocan Valley rail line in 1993. Today, a tug and barge service continues to ferry rail cars from Slocan to Roseberry. More »

The South Kootenay area is defined by the arc of the Columbia River that flows south in to Washington State. The Columbia River has shaped the communities that sit on its banks. A bridge across it prompted the first settlement at Castlegar, while the sternwheelers that plied the river facilitated both the founding of Trail and the successful gold mines of Rossland. About 100 years ago, prospectors came to the West Kootenays, attracted by its rich ore deposits. Mining ghost towns can be found now, silent relics of past treasures. Visitors can learn about the development and history of the area at mining museums in Kaslo and New Denver. If you are a skiing enthusiast, you will be eager to try some of the best powder skiing in the world. The towering mountains often receive 23 metres of snow per season and contain more than a dozen snow sport areas. Red Mountain, for example, has been critically acclaimed as holding some of the finest snow sport resources in North America. Many other hills in the region offer snowcat excursions to the most exciting runs and helicopter charters can hunt out the best powder. More »

Kootenay Lake, the largest natural lake in the Kootenay Rockies is flanked by forested mountain slopes. The lake was created as the great icefields retreated after the last ice age. The valley is bounded by the Selkirk Mountain range to the west and the Purcell range to the east. Peaks ranging from 2,100 – 2,750m (7,000 – 9,000ft) dominate the terrain, with year-round ice fields on the northernmost mountains. The slopes are heavily forested with a mix of pine, Douglas fir, hemlock and cedar, and support a large and diverse range of flora and fauna. Today people cross Kootenay Lake on a car ferry. As late as the 1950s, a fleet of sternwheelers was the only link for many of the towns and villages that surround this large body of water. The settlements of Riondel, Kootenay Bay, Crawford Bay, Gray Creek and Boswell are strung out along a thin band where Highway 3A follows the east side of the lakeshore. Wilderness is always close at hand and humans share the landscape with large populations of deer, elk, moose, bear, mountain goat, cougar, and coyote. Kootenay Lake remains ice-free in winter, and wetlands at both ends of the lake and at Crawford Bay, including the 7,000 hectare Creston Valley Wildlife Management Area, host hundreds of species of migrating and nesting birds – even wild swans and pelicans! Nelson is a funky mountain community set on the west arm of Kootenay Lake. As one of the oldest communities in the province, many of its buildings are restored heritage sites. Take a walking tour of several Victorian homes while exploring a city whose many artisans and musicians create a relaxed and laidback feel. More »

The Canadian Rockies region is located between the Rocky Mountains in the east and the Purcell Mountain Range to the west. The mighty Columba River flows north through the entire Valley. The Columbia Valley features one of North America’s longest continuous wetlands – a bird and wildlife viewing paradise. Amid the untamed wilderness and rugged mountains, the valley is home to some of the province’s most elegant golf courses. The beautiful tree-lined fairways are set against forested mountain slopes. The clubs offer challenging play, professionally maintained courses and groomed outdoor luxury that never lets you forget the enormity of your surroundings. If you are looking for luxury that comes straight from the wilderness, then mineral hot springs are a required visit including Fairmont Hot Springs and Radium Hot Springs. Whether or not you believe the springs possess special therapeutic and healing properties, there is no arguing the pleasure warm relaxing water can bring. More rustic and undeveloped springs are scattered through the mountains.

The Elk Valley, wedged into the heart of the Canadian Rockies, is approximately 60 km (37 mi) from the Alberta and Montana, US borders. From its source at Elk Lakes Provincial Park, the Elk River makes its way through Elkford, Sparwood and Fernie before joining the Kootenay River, near Cranbrook. The river offers fantastic fly-fishing. The Crowsnest Pass cuts straight through the continental divide linking Southern Alberta with the stunningly beautiful Elk Valley. More »

The Kootenay Rockies are a place of adventure, beauty and culture set against the humbling majesty of towering mountains. Glaciers, emerald lakes, powdered ski hills, elegant golf courses and unique communities promise not only a visit you’ll always remember, but a mountain experience that will last your whole life.

Explore the Communities of Kootenay Rockies