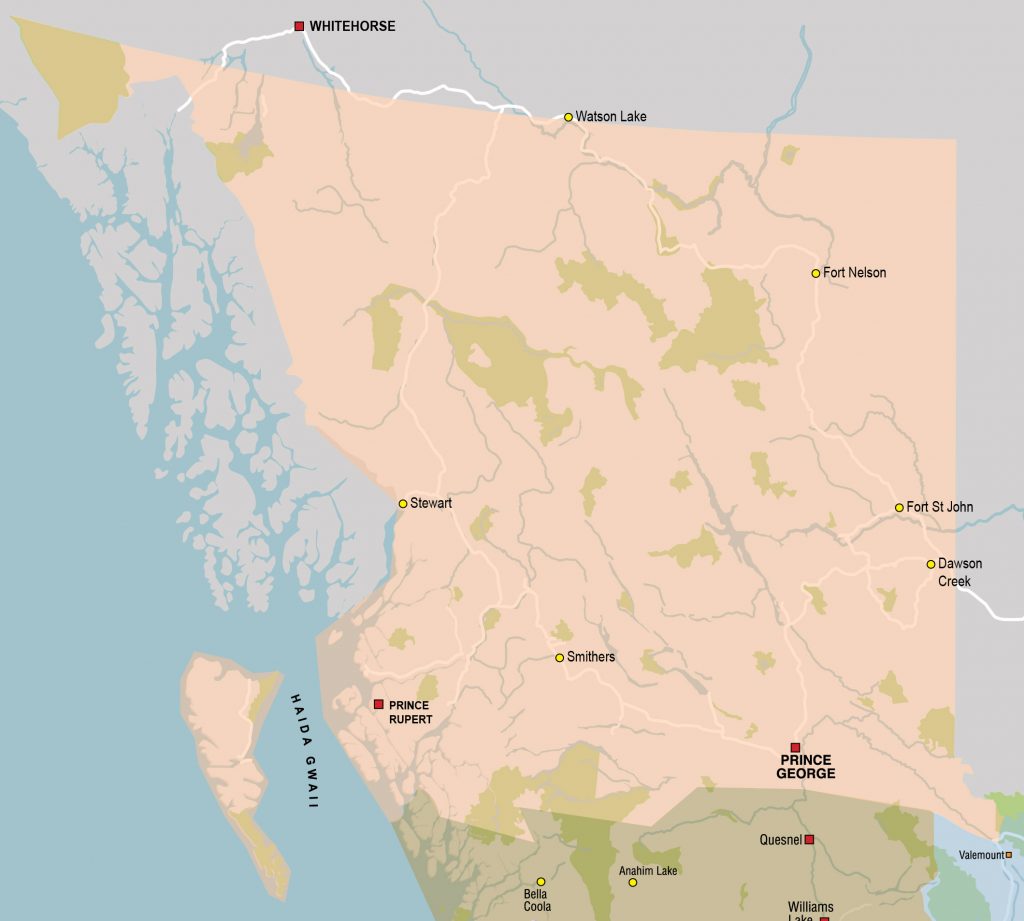 Northern British Columbia is a vast wilderness of grizzly bears, pristine glaciers, ancient totems and raw rugged beauty. Out of the vast land of white water, creeping glaciers and dense, ancient forests come tales of a wilderness steeped in mystery and adventure. The North is a land where outdoor recreation is a certainty and where alpine mountains and crystal-clear lakes offer everything from helicopter skiing to salmon fishing. Ancient totems loom as a testament to show that aboriginal culture is not just vibrant, but alive and well.

Northern British Columbia offers stunning scenery and limitless outdoor adventure recreation. Speckled with countless rivers and streams, the landscape is inhabited by untamed wildlife and is framed by picturesque backdrops. As a land trekked by true nature enthusiasts, lofty snow-capped mountains and deep plunging valleys will surround you.

Like a large outdoor playground, the north offers an extensive wealth of wilderness recreation for those who choose to indulge. Tourists can find themselves hiking, river rafting and horseback riding all in a short space of time. Other activities on offer include golfing, alpine and cross-country skiing and mountaineering.

Visitors can also explore the abundance of cultural heritage in Northern BC. The Haida Nation has inhabited the Haida Gwaii island for 10,000 years and was recognized as the prime culture of the west coast when the Europeans first explored Canada. On the mainland, countless communities house the remains of once booming trading posts and mining or logging towns. Today, these cozy communities offer a getaway full of heritage and ancestry for those curious to explore.

Traveling through Northern BC offers a wonderful glimpse of untouched wilderness. Three main highways give access to Northern BC: Yellowhead Highway 16, Alaska Highway 97 and Stewart Cassiar Highway 37. Atlin Highway 7 provides access to the community of Atlin in the very northwest of the region. This huge, diverse region is surrounded by Alaska and the Yukon Territory to the North; the Pacific Ocean to the west; and Alberta and the Rockies to the east.

The Alaska Highway takes you on a 1,000 km (600 mi) journey shifting from fertile hills of the Peace River Valley through to the wild mountain splendor of the Rockies. Lucky eyes may catch a glimpse of an elusive grizzly or mountain goat. The highway climbs through three spectacular mountain wilderness parks: Stone Mountain Provincial Park, Muncho Lake Provincial Park and Liard River Hot Springs Provincial Park and on to the BC and Yukon border. Amid all the natural majesty, find time to be pampered with massages and full spa treatments, gourmet meals, and sleep with the full colors of the northern lights overhead. As you travel the historical route, take time to savor the fresh mountain air, wilderness vistas, abundant wildlife and northern hospitality. This route is home to the major cities of Prince George, known as the Capital of Northern BC, Dawson Creek and Fort St. John. More »

Found well off the beaten track and in the rugged mountains, Atlin is referred to as “Atlin Eden” by many visitors. Such a name is fitting as Atlin’s natural beauty is captivating and inspiring. Historic buildings reveal Atlin’s pioneering past and visitors can rent a gold pan and stake of piece of land for their own fortune just like many did at the turn of the century. Enjoy a day of fishing or kayaking in the serene and enchanting lakes – an outing that will not be forgotten. More »

Haida Gwaii has become renowned for its plethora of natural beauty and its rich First Nations lineage. Visitors can expect spectacular wildlife viewing that includes many species of birds, migrating whales and seals and sea lions. The towering western hemlock, red cedar, and Sitka Spruce forests, as well as the rugged mountains, freshwater streams, beautiful beaches and restless ocean all come together on the magnificent Haida Gwaii. Each of the main towns offers its own unique scope on island life – relaxing and slow paced yet wholehearted and welcoming. More »

The Stewart-Cassiar region on the northwest of British Columbia, stretches from the Skeena River to the Cassiar Mountains and offers some of the most awe-inspiring scenery on the continent. Wild rivers, deep canyons, magnificent glaciers, clear lakes and pristine areas distinguish the region. The 721 km (448 mi) long Stewart-Cassiar (Highway 37) connects the communities of the region and offers an excellent alternate route for visitors traveling to or from the Yukon and Alaska. The First Nations were the first people of the area, and their communities offer opportunities to experience the rich Native heritage locked up in the region. Aside from the deep cultural roots, there are many wilderness parks to explore – Mt. Edziza and Spatsizi Plateau are the defining features along the route. This region is an acclaimed wilderness expanse with views of truly rugged and remote scenery. Travellers are sure to hold on to memories of the visitors and ambiance that fills the north. More »

The scenic, interprovincial Yellowhead Highway 16 stretches 1,073 km (667 mi) across the lower section of Northern BC and crosses from the Pacific Ocean into British Columbia’s Mt. Robson Provincial Park. The scenery here is simply extraordinary in every direction. The park is dominated by Namesake Mountain, which at 3,954m (12,972ft) is the highest point in the Canadian Rockies. It’s here, up in the glaciers, where the Fraser River is born. Highway 16 continues west across the province to Prince Rupert on the north coast then after a ferry ride from the mainland terminates at Masset on Haida Gwaii. This northern route follows a historic trail traditionally used by settlers, gold-seekers, fur-traders, explorers, aboriginal people and the Royal Canadian Mounted Police. Along the Yellowhead route find towering mountains, spectacular rivers, glacier-fed lakes, diverse wildlife, vast valleys, beautiful wildflowers, temperate rainforests and BC’s spectacular coastline. If you travel early in the year, witness spring’s “coming to life”, while later in the year be amazed by the stunning fall foliage found along this westerly route in Northern BC. More »