Hudson’s Hope is a small community near the Alaska Highway in Northern British Columbia. The area is forested by aspen and poplar trees, and houses a wide variety of wildlife. Animals common to the area include moose, bear, deer, sheep, goats and elk. A hatchery annually releases sportsfish, mainly rainbow trout, into the lakes. The area is well-known for dinosaur tracks and fossils which have been discovered in the area. The ichthyosaur Hudsonelpidia was named after the community when it was discovered there in the 1960s.

In addition to the natural landscape the region is also home to several man-made landmarks. The WAC Bennett Dam is one of the largest earth-filled dams in the world, and offers scheduled tours. Just behind the dam is Williston Lake, the largest reservoir in British Columbia. The Peace Canyon Dam is a hydro-electric dam which can be seen from Hudson’s Hope Bride. The visitors centre features life-size dinosaur replicas. The Hudson’s Hope Museum exhibits one of the finest collections of fossils around – all taken from the Peace River area.

The region is also home to an abundance of wildlife at the Jamieson Woods Nature Preserve, including bald eagles, and seven distinct species of wood peckers. Trails through the area showcase the beautiful landscape of the region. Home to ancient sand dunes, mature mixed pine/aspen forest, abundant variety of flowers and shrubs including calypso orchids and intricate mushrooms.

Hudson’s Hope is located on the banks of the Peace River in the Rocky Mountain foothills of British Columbia, 90 km (56 mi) west of Fort St. John and 66 km (41 mi) north of Chetwynd on Hwy 29.

Hudson’s Hope was originally known as Rocky Mountain Portage Fort, built by Simon Fraser in the autumn of 1805 at the foot of the Rocky Mountain Canyon on the north bank of the Peace River. Operated for a time by the Hudson’s Bay Company after its coalition with the North West Company in 1821, it was abandoned in 1825 to punish the Indians for a massacre at Fort St. John in 1823.

New Hudson’s Hope was built about 1875 on the south bank of the Peace River about 12 miles further upstream near the east end of the canyon. Some time after 1880 this post was again moved to its present location on the north side of the river, on a seven-acre site surveyed out and still remaining in the name of the Hudson’s Bay Company, except for portions sold to the Anglican Church and the Hudson’s Hope Historical Society.

Hudson’s Hope continued to be an important navigational point because of the impassable rapids above the town. Settlers and supplies were freighted in from Lake Athabasca at first, then later from Peace River Crossing when the railway reached that point. The sternwheelers, beginning with Bishop Grouard’s St. Charles in 1903 broke the eternal silence of the North with their sharp whistles and easier ingress of settlers. This boat operated the 525 miles between the rapids called Vermilion Chutes to Hudson’s Hope.

In 1905 the Hudson’s Bay Company put their sternwheeler, SS Peace River, into operation. It was a 110 ft long vessel that could carry 40 tons of freight.

In 1954 the population of Hudson’s Hope was under 100. In 1965 it was 2,700. True to its erratic nature, Hudson’s Hope in 1965 became an “Instant Municipality,” the third in British Columbia, matching its status of being also the third oldest community in the Province of British Columbia. Its 400 square miles held the largest territory of any municipality in the province. During the Bennett Dam hey-day, activities in the town included no less than 37 recreation and service clubs, ranging in interest from music appreciation to fly-tying to sky diving. 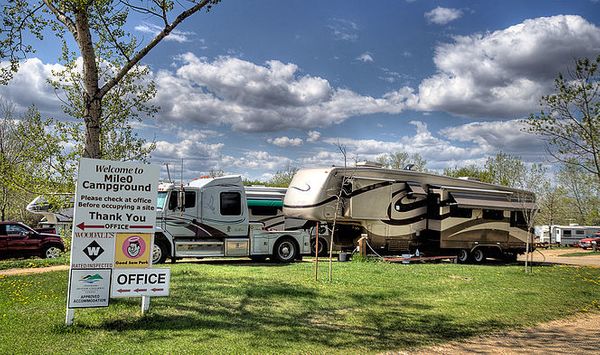 Mile "0" features a variety of sites complete with all your RV and camping needs. Stay under a canopy of beautiful trees adjacent to the Walter Wright Pioneer Village, Rotary Lake and the Dawson Creek Golf Club. ... More Details 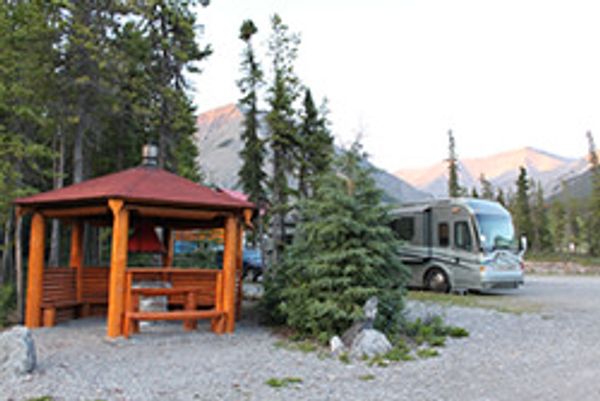 Stay with us and save a day on your journey along the Alaska Highway (Alcan Highway)! Halfway between Whitehorse and Fort St. John, Muncho lake is a excellent spot to spend the night. The beautiful Northern Rockies Lodge is located by Muncho Lake in the northern tip of the Rocky Mountains. The Lodge ... More Details

Nestled on the banks of the mighty and majestic Peace River, Peace Island Park has over 100 campsites for tents, groups and RVs, including drive-thru with electrical hookup. Campers will find there are various sites to choose from, including serviced, non-serviced and group sites. Bring the whole fa ... More Details

This RV campground is the perfect destination for big rigs, slide in truck campers and everything in between. Full hook-ups and fire rings at each site. Firewood available. WiFi available throughout the park.  Cable TV hook-ups at each site. Pull-thru spaces available and back-in spaces along Refle ... More Details
1 2 Next