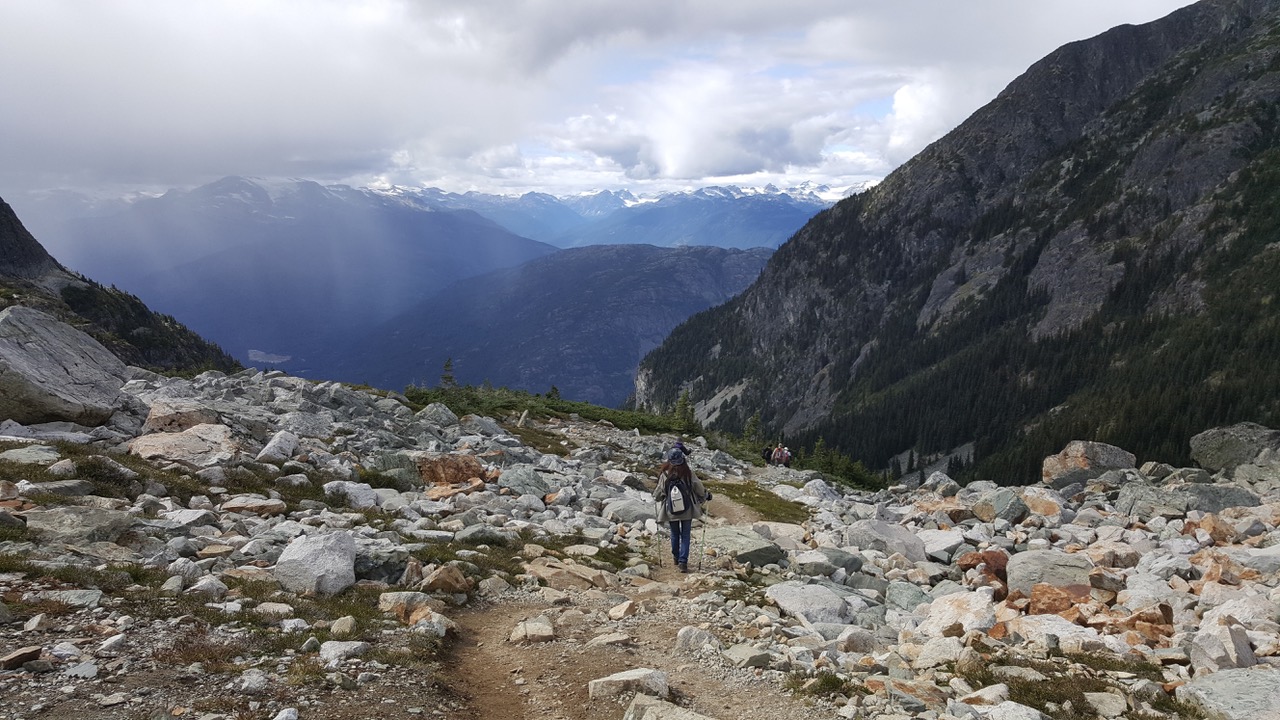 The Coast Mountain Circle Tour explores the mountains, forests, and canyons that make British Columbia a world-renowned place of wilderness beauty covering almost 600 kilometres (360 miles). The tour takes two to four days and winds through misty coastal mountains and into the province’s rain shadow and dry highland plateau. It takes you through historic Gold Rush Country, following the path of the gold seekers down the Thompson and the raging Fraser Rivers.

Starting in Vancouver and crossing Lions Gate Bridge to North Vancouver and along Highway 1 the mountains are always in view. Highway 1 turns into the Sea-to-Sky Highway (Highway 99) and climbs up from the Pacific Ocean and high into the Coast Mountain wilderness. The road passes by Horseshoe Bay, home of one of the BC Ferries terminals, before winding around spectacular fjords and sheer rock faces that rise up from the sea as one reaches Lions Bay. The journey along Howe Sound offers vistas from highway pull outs – places to take memorable photos.

At Britannia Beach, which was once the site of the largest copper producing mine in the British Commonwealth, you can tour the award winning National Historic Britannia Mine Museum. The tour includes a train ride though the mine and educates the traveler on the ingenuity of geologists of the early 1900s. Further along the Sea to Sky Highway is a must stop at Shannon Falls – Canada’s third largest waterfall with a 335 m (1,099 ft) drop, three times the height of Niagara Falls and right beside the highway.

The city of Squamish sits on the flat plain of the Squamish River delta and is at the head of Howe Sound. Squamish is a winter activity destination and popular in the summer with kiteboarders. The nearby vertical bluffs offer rock climbers excellent climbing opportunities. A ride on the Sea to Sky Gondola provides stunning views and takes you to an adventure playground with activities for all ages. Just south of the town along Highway 99, The Stawamus Chief soars more than 652 m (2,139 ft) above sea level. The Chief offers over 200 climbing routes up to its summit. Train buffs will want to visit the West Coast Railway Heritage Park to return to an era when trains dominated transportation.

Highway 99 turns inland after Squamish and climbs through the Coastal Mountains to the resort community of Whistler. Along the way is access to Garibaldi Provincial Park for adventurous hikers and mountaineers. There are miles of trails in Garibaldi and Tantalus Parks. Those seeking gentler pursuits can visit Alice Lake Provincial Park where canoeing, kayaking, bird watching, and picnicking are available. Also along the way is Brackendale, home to thousands of bald eagles between November and April. These birds come from all over the northwest to winter here. Other picturesque stops include Brandywine Falls and Daisy Lakes and numerous views of the ice-capped mountains.

Whistler Resort is a snow-sport mecca during the winter and Blackcomb Mountain offers skiing during the summer months. Mountain bikes and golf clubs are seen alongside skis and snowboards at the resort’s fine restaurants and exciting nightclubs. Whistler has several designer championship golf courses, charming boutiques, art galleries, numerous mountain bike runs, and of course great skiing/snowboarding. Many major events take place at this four-season resort.

From Whistler, Highway 99 takes the traveler to Pemberton, a logging, ranching and farming community surrounded by steep, alpine mountains. The Pemberton Valley is threaded with rivers and steep walled alpine valleys punctuated with glacier fed lakes. Hidden in the hills are many natural hot springs, some popular and some only the locals know. Be sure to ask for the best place to go and soak. Pemberton boasts a championship golf course with wildlife close by and stunning views of glacier peaks from the greens and tees. The valley also offers horseback riding and tremendous fishing experiences.

From Pemberton, the highway becomes the Duffy Lake Road (Highway 99) and winds through the most spectacular of the Coast Mountain peaks. At the start you will enter the Mount Currie Indian Reserve of the Lil’wat group of Stl’atl’lmx Nation. While traveling through the mountains along the Duffy Lake Road you will leave the wet coastal forests and abruptly enter the rain shadow of British Columbia’s interior. Hardy pine trees and sagebrush replace the towering fir trees and green foliage of the west coast. Duffey Lake Provincial Park provides a close look at the dramatic transition between these two climates.

Two other routes are available from Pemberton and Mount Currie: one over the Hurley River Road which should only be taken in the summer and is more suited to 4X4 drive vehicles; the other through Birkenhead Lake Provincial Park which is an easier route.

Taking the Birkenhead Lake Provincial Park route from Mount Currie to Lillooet takes you past numerous lakes and is a favorite highway for the avid fisher. The route takes the visitor to the town of D’Arcy, which houses the Anderson Lake fish hatchery. As you travel along from Anderson Lake you encounter the hydro dam at Seton Portage, which feeds into Anderson Lake and then Seton Lake. Around each corner is a magnificent view of mountains, and the lake vistas entice fishermen to cast a line. The fish in the area are kokanee, rainbow trout, and Dolly Varden. As you travel the route keep a keen eye out for wildlife such as moose, deer, black bear, martens, beaver, and mountain goats.

The north route along Hurley River Road through the Hurley Pass is a unique mountain road experience that offers fantastic ice field views. The road takes the traveler onto the historic mining community of Gold Bridge and the Bralorne mine. Heading east from Gold Bridge along Highway 40 towards Lillooet offers visitors extraordinary mountain views as the highway hugs Carpenter Lake.

Horses are a Frequent Sight in Lillooet

The town of Lillooet dates back to the Cariboo Gold Rush. Lillooet was mile 0, the start of the old Cariboo Waggon Trail that joined with the Gold Rush Trail south at Lytton (along Highway 12). The sights are reminiscent of the frontier days – the Hangman’s Tree, Old Newspaper office, and Chinese Rock Tailings are a throwback to a time long before the Duffy Lake Road was open to tourists. At Lillooet you can either continue north on Highway 99 or turn south along Highway 12 towards Lytton.

Highway 12 takes you into an arid high mountain region that records some of the hottest temperatures in Canada. It is here that the Coastal Mountain range meets a semi arid desert created by the rain shadow of the mountains. Just east of Lytton is the Stein Valley Heritage Park, the last major, biologically complete unlogged valley in British Columbia. The park contains 14 ecological zones and offers the visitor an opportunity to visit all of the zones.

If you choose to head northeast on Highway 99 from Lillooet, the road twists through the cliffs of the Fraser River Benchlands. Along the dry, scrubby valley walls sit natural shelves formed centuries ago when they were the river’s bed. After ages of erosion the Fraser has cut deep into the canyon leaving these benches high above the river. With irrigation, the shelves easily became lush green fields – a stunning contrast to the yellow-brown canyon walls.

At the junction of Highway 99 and 97, is Historic Hat Creek Ranch. Get a taste of early pioneering life, and then turn south towards Cache Creek. Known for its ‘wild west’ ambience, the town was a stopover for travelers on the arduous Gold Rush Trail.

Follow Highway 1 and the Thompson River south and stop where the Canadian Northern Pacific Railway hammered in its last spike. As you drive, notice the terrain and think of the challenge that faced railway engineers and laborers. While heading south on Highway 1 the canyons grow steeper and narrower, making the accomplishment even more amazing.

At the town of Lytton, the Thompson and Fraser Rivers meet at a spectacular confluence. Venture to the water’s edge and watch the fine line that emerges as the azure waters of the Thompson merge with the muddy Fraser. For a close-up look, adventure guides offer river rafting trips.

Highway 1 is carved into the cliffs of the Fraser Canyon following the river as it rushes between the rocky walls and past Hell’s Gate, the narrowest point on the whole Fraser. Hell’s Gate Airtram descends into the gorge and brings visitors close to the raging white water torrent. An international village has shops, restaurants, and an historical education centre.

At Yale, the canyon opens up and the Fraser River spills out into the Fraser Valley. The raging white water becomes a slow, meandering waterway carrying log booms, barges and tugboats. The Yale Museum provides the background on the significance of this location as the start of the Gold Rush Trail.

Further on is Hope, where the traveler can head east to Vancouver along either Highway 1 or Highway 7. Hope is at the foot of the Cascade Mountains and is known as the Chainsaw Carving Capital. Giant wooden chain-sawed sculptures are placed throughout the town, depicting wildlife and the surrounding area.

The route along Highway 7 north of the Fraser River is very scenic and includes a short 8 kilometre jog to the resort village of Harrison Hot Springs, one of British Columbia’s finest resort communities. Since its inception, Harrison Hot Springs has grown in class and reputation, and is now considered a world-class vacation destination. The town’s sandy beaches and two mineral hot springs beckon tourists, inviting them to relax while taking in the stunning scenery. The string of inspiring mountains cradle a majestic 60 kilometre stretch of lake.

Further along Highway 7 is Mission and the site of the original 9,000-year-old Sto:lo settlement the Xa:ytem Longhouse Interpretive Centre. Westminster Abbey in Mission welcomes visitors to attend liturgies, roam the 80-hectare abbey farm and watch life in the seminary campus. Looking out from the hill is a view of the Fraser River and its valley unfolding below.

As you leave Mission towards the city of Vancouver you travel through the berry fields and dairy farms of the lower Fraser Valley. Communities to explore along Highway 7 include Maple Ridge, Pitt Meadows, Coquitlam, Port Moody, and Anmore.

If you take the Highway 1 route to Vancouver from Hope you pass by Bridal Falls Provincial Park with its unique 122 m (400 ft) waterfall. Further west is the city of Chilliwack and the famous Vedder River, which boasts year round salmon and trout fishing. Chilliwack is farm country and is surrounded by lush fertile fields and is the home of sweet Chilliwack corn on the cob.

Along the southern side of the Fraser River, Highway 1 passes through the communities of Abbotsford, Fort Langley, Langley, Surrey before reaching New Westminster, Burnaby and finally Vancouver. Fort Langley National Historic Site showcases what British Columbia life was like in the early 1800s. The fort has working exhibits.

As you continue along Highway 1, you eventually return to Vancouver, completing your tour of Vancouver, its coast, mountains, rivers, and canyons.