Lost Lake - Manning Park, BC Photo Courtesy of Destination BC 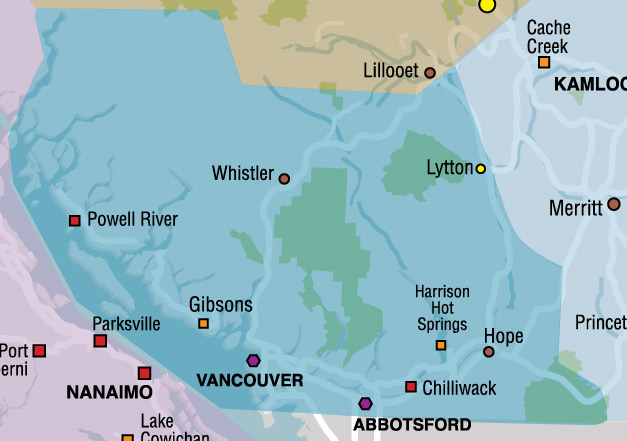 The Vancouver Coast and Mountains tourism region boasts an amazing range of scenery and terrain, as well as unlimited activities and culture. From the cosmopolitan and trendy neighbourhoods of downtown Vancouver to the rainforests and secluded coves of the Sunshine Coast; from the world-renowned mountain resort of Whistler to the farmlands and rivers of the Fraser Valley, a wide variety of spectacular scenery and diverse attractions are never more than a short drive away.

East from Metro Vancouver is Fraser Country and the mighty Fraser River, one of the world’s greatest salmon-producing river systems. This area offers farming experiences, wineries and an abundance of local produce, as well as great fishing opportunities. The Fraser Canyon affords the visitor outstanding views and rock formations as the river cuts through the Coast Mountains. The Fraser is the focus for the area’s economy, transportation and culture. Following the First Nation people, it became the Cariboo Wagon Trail, onto the Gold Rush Trail and finally the route for both the Canadian National and Canadian Pacific railways. More »

Northeast of Metro Vancouver is Sea to Sky Country and the world-famous resort of Whistler. The drive along Howe Sound offers stunning vistas of towering rock faces that plunge into the sea, mountains of glimmering ice, sparkling lakes and immense natural forests. Along the way the spectacular gondola ride in Squamish and the award winning Britannia Mine Museum National Historic Site offer reasons to come here.  Travel on beyond Whistler as the highway turns inland and hugs the lakes and rivers ending at Lillooet, a community that celebrates the Gold Rush era. More »

Heading northwest by ferry to Langdale, visitors can follow over a hundred miles of rugged coastline from Vancouver on up the Sunshine Coast to Desolation Sound. The stunning scenery does not disappoint nor does the exceptional fishing and scuba diving. Named for its 2,400 hours of annual sunshine the lifestyle here is relaxed and is home to internationally known artists, musicians and artisans. More »

Vancouver, Coast and Mountains is the southwestern edge of British Columbia’s mainland and is anchored by the glamorous cityscape of Vancouver that nestles at the foot of the stately peaks of the Coast Mountain range. The backdrop of the region is the coniferous green forest that envelops the mountains. Vancouver is a cosmopolitan city in a spectacular location on the Pacific Ocean. More »

When making plans to travel to the Vancouver, Coast & Mountains region, consider these driving routes and tours. Some take one to two days, others a week. All of them start in, or cross, this region and all provide a snapshot of what British Columbia’s stunning natural environment is all about.

Explore the Communities of Vancouver Coast and Mountains