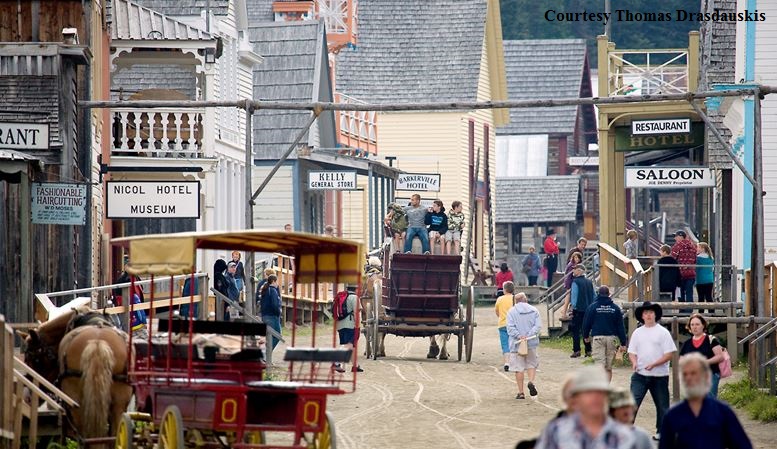 Tucked away in the Cariboo region, British Columbia’s best known ghost town is Barkerville. In 1862 the town was founded by Billy Barker, who was originally from England. He tried his luck in California during the gold rush days and eventually headed to British Columbia where he struck it rich in gold.

The town quickly grew as word spread about the gold and Barkerville became the largest town north of San Francisco. Like many other gold mining towns, business was booming for shopkeepers who sold supplies to the miners, and soon a town sprung up with tents and makeshift cabins, and then houses, businesses, restaurants, churches, and even a theatre opened to meet the miner’s needs.

By the late 1800’s the gold rush had ended and the miners had moved on to try different locations around British Columbia or further north in Alaska. Shopkeepers lost their customers, went broke, and closed down, and only a handful of people remained in town. During the 1930’s when the price of gold skyrocketed, there was renewed interest in Barkerville and miners returned hoping to find undiscovered claims. In 1958 the province decided Barkerville had significant historic value and that the town should be restored and operated as a tourist attraction.

Today Barkerville comes to life as an interactive museum and is typically open mid-May through late September. Employees dress up in period costumes and offer tours of the town and demonstrations of life in the 1800’s. Watch a blacksmith at work, pan for gold (extra charge), see cooking demonstrations, take a ride on the stagecoach (extra charge), and walk up to the courthouse for a trial re-enactment and learn about Barkerville’s criminals. There are several merchants open for business. Pick up a souvenir, try a bowl of homemade stew, or enjoy an ice cream cone.

Want to find out what a good old fashioned Christmas was like during the 1800’s? Barkerville is open for a weekend in early December to celebrate a Victorian Christmas. Tourists are invited to admire the decorations, sing carols, and enjoy a treat from the bakery.

Barkerville is open from mid-May through late September.  The town is open year round, and during the off season it’s free to wander around town and look at the outsides of the buildings. Nothing is open and heritage staff are not working during the offseason. Barkerville holds a Victorian Christmas in December and admission is by donation. Check the website for more information on current rates and special events. http://www.barkerville.ca/

The town of Wells, about 5 km from Barkerville, has a few hotels and guest houses and there is camping nearby.

Barkerville is about a 10 hour drive from Vancouver and about an hour and a half drive from Quesnel, the closest major town on the Cariboo Highway, also known as Highway 97. Watch for the signs for Highway 26/Barkerville/Wells/ Bowron Lakes and take that route.