Dawson City is a small community in the Yukon, linked inseparably to the Klondike Gold Rush. The region has a subarctic climate, with an average temperature of only 15.7 C (60.3 F) in July, and -26.0 C (-14.8 F) in January. The region is home to 8 National Historic Sites of Canada, including the “Dawson Historical Complex”, a National Historic Site encompassing the historic core of the town. The Downtown Hotel at Second Avenue and Queen Street has garnered attention from the media for the most unusual ‘Sourtoe Cocktail’. This cocktail features a real mummified human toe.

Located along the Klondike Hwy, where it meets the Top of the World Hwy, near the Yukon-Alaskan border; at the crossing of the Yukon River.

The original settlement in the region was founded by Joseph Ladue in 1897 and named after the noteable Canadian Geologist George M. Dawson, who had explored and mapped the region in 1887. It originally served as the territory’s founding in 1898 until 1952, when it was moved to Whitehorse.

Dawson City was the centre of the Klondike Gold Rush, since it’s beginning in 1896. At that time the small First Nations Camp at that location grew into a thriving city of 40,000 by 1898. In 1899, when the gold rush ended the population plummeted to 8,000. When Dawson was incorporated as a city in 1902, the population had sunk to only 5,000.

Dawson City in the Yukon Territory

The City of Dawson 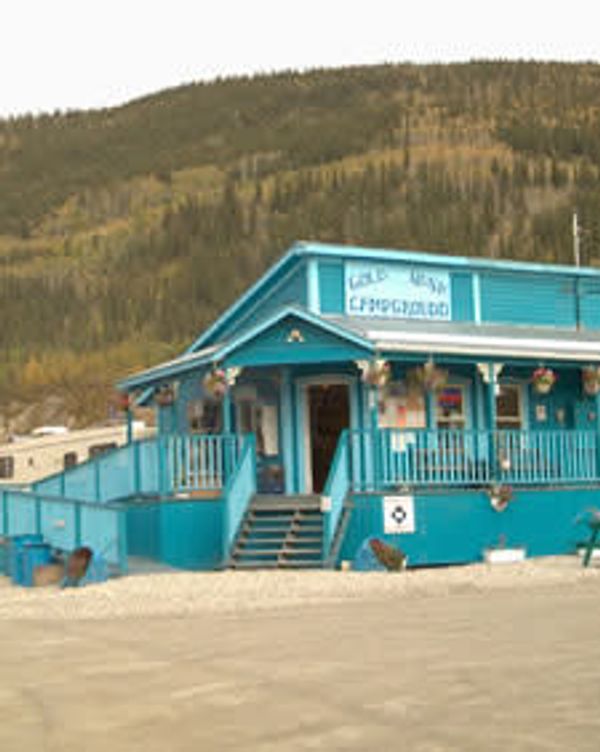 Gold Rush Campground and RV Park is the only downtown RV Park located in the heart of historic Dawson City. Free WiFi computer access. Take a step back in time to the era of the placer miner and search for gold. Restaurants and shopping are steps away, and the goldfields a short drive. ... More Details