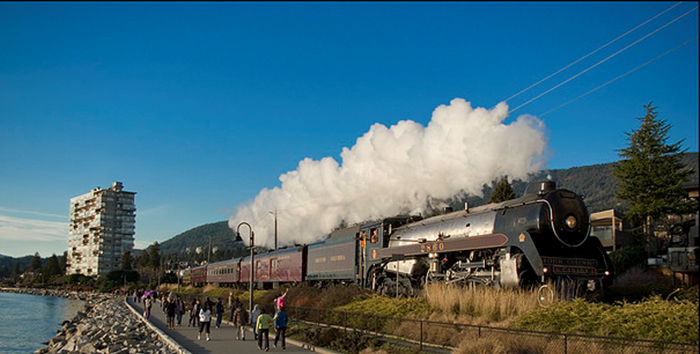 The Royal Hudson in its operating days with BC Rail

I have been a railway fan forever. There is nothing to compare with the sound of a racing steam engine whistling for a crossing on a cold winter morning. You can imagine my delight to find there is an awesome railway museum not far from Vancouver that is home to an operating Classic Royal Hudson steam engine.

Suzan, my wife and I went on an afternoon outing to the West Coast Railway Museum in Squamish, only about an hour north on the Sea To Sky Highway about halfway to Whistler. As they say, “getting there is half the fun”, it was a beautiful drive along picturesque Howe Sound with a backdrop of snow capped peaks. We passed the BC Mining Museum at Britannia that would be for another excursion. When we reached Squamish the park was easy to find. We went approximately 2km past the McDonald’s stop then left to Industrial Way and followed the signs.
View Larger Map

The Heritage Park turned out to be a very well designed and excellent site, with exhibits and features for all ages. We realized this would be a great location for a family outing, with locomotives, railway passenger and freight cars, rides and many other static displays. The locomotives and cars were strikingly restored and most were available to walk-through. Particularly of note was a business car that had been carefully restore to its original varnished wood finish. We could vividly picture executives relaxing or talking business as the train rolled along.

The Royal Hudson in its operating days with BC Rail

However it was another car that instantly brought back vivid memories. You see, my father worked on the trains as a Railway Mail Clerk from the 1930’s to the 1950’s. His work place was a specially designed mail car that was, in fact, a miniature post office. These Railway Post Offices (RPO’s) operated throughout Canada until the mid 1960’s when mail was then moved by truck and air.

When I was about 12 years old, my dad snuck me on board one of his trips from Edmonton to Dawson Creek and back. As I entered the car at the Museum, I realized it was exactly the same as the one I had ridden on that trip. I could picture my dad standing in this swaying car throwing parcels and mail several feet into suspended mail bags. I explained to Suzan all mail clerks needed to pass a sorting test every year using cards—and in that car was the actual case! There was even a piece of identification that one of my dad’s colleagues had used during the Second World War.

We would recommend this easy yet very interesting outing. The West Coast Railway Association’s collection at the Heritage Park consists of over 80 pieces of heritage railway rolling stock plus a significant collection of railway related artifacts. The collection represents all the major railways which have served British Columbia – Canadian Pacific, Canadian National, Pacific Great Eastern, BC Electric and Great Northern. The park is open all year and features several special events. More detailed information can be found at West Coast Railway Association.