Northern BC’s east-west corridor Yellowhead Highway 16 has friendly communities, great attractions and incredible scenery. Slow down and take the time to fully experience the “Yellowhead”. It all begins in the eastern border community of Tete Jaune Cache with the hovering Rocky Mountains to the north and the Cariboo Mountains to the south.

Traveling westward you will arrive at Prince George known as BC’s northern capital, a culturally diverse city situated at the confluence of the Fraser and Nechako Rivers. The south-north Alaska Highway 97 intersects in Prince George with the east-west Yellowhead Highway 16. People have come to Prince George from around the globe and provided the city with its cosmopolitan flair, which is reflected in ethnic restaurants and diverse recreational and cultural activities. Those with an eye for Canadian art enjoy exploring the Two Rivers Gallery, which showcases the unique work of local, regional and national artists. Those interested in science or who have a love for history and dinosaurs can visit The Exploration Place Science Centre and Museum in Fort George Park. Or simply take a short drive in any direction and you’ll discover a lake to fish or a trail to hike, or maybe just a quiet spot to sit and get away from it all.

Driving beyond Prince George and through the rolling hills, farms and forests you will arrive in the charming town of Vanderhoof. Vanderhoof has its roots as the first permanent agricultural settlement of the province. Fertile land and dense forests drive the economy here as cattle, buffalo and dairy farming as well as logging and tree planting provide the major sources of income. Here, you will come across a friendly blend of loggers, farmers, and cowboys. Vanderhoof is the crossroads for a side trip to Fort St. James, a National Historic Site. Lying just 62 km (37 mi) to the north on Highway 27, the site holds buildings from 1880, which were originally used during the fur-trading era.

Further along the Yellowhead, the beautiful Lake District begins with the towns of Fraser Lake and Fort Fraser. Take a few minutes to admire the migratory trumpeter swans that drop in on Fraser Lake prompting the community to call itself the White Swan Capital of the World.

You will then come upon scenic Burns Lake. A carved cedar trout on the entrance of town greets visitors and reminds them they are in the heart of the Lake District. This is the ideal place to leave the noise and stress of a bustling city and become reacquainted with the great outdoors. Anglers will feel right at home as they descend into the area’s numerous lakes and cast a line to catch rainbow and cutthroat trout, kokanee, ling cod, salmon and many other fish.

Burns Lake also serves as the northern gateway to Tweedsmuir Provincial Park. Encompassing 981,000 hectares, this is BC’s second largest provincial park. To access North Tweedsmuir (the park is divided into North Tweedsmuir and South Tweedsmuir by the Dean River) follow Highway 35 south and take a free ferry across Francois Lake. Then simply follow the signs to the park ranger station at Chikamin Bay. As with many other Northern BC parks, visitors should be totally self-sufficient and ready for any situation the wilderness may bring. Those exploring will find an abundance of wildlife and exquisite scenery in this remote area. Woodland caribou, moose, black and grizzly bears and wolves leave tracks throughout the park while ptarmigans, golden crowned sparrows and ospreys can be seen overhead.

West of Burns Lake and north of Highway 16 is the turn-off to the small community of Granisle which provides access to BC’s longest freshwater lake – Babine Lake.

Houston is the next town along the Yellowhead. It boasts the world’s largest Fly Fishing Rod at 18m (59ft) long, which serves as a testament to the excellent fishing available for steelhead, salmon, and trout in and around the Bulkley and Morice river systems. If you should get bored of fishing, there’s also the chance to canoe, hunt, mountain bike and hike.

A little up the road, Telkwa is nestled on the banks of the Bulkley and Telkwa Rivers. This picturesque village borders Tyhee Lake Provincial Park. Surrounded by snow-capped mountain ranges and a myriad of lakes and streams, Telkwa’s spectacular natural setting offers extensive outdoor adventure and recreational opportunities, whether you love to hike into an alpine lake, canoe through white water rapids, ski down fresh powdered slopes, or battle the will of a large Steelhead.

Smithers offers outstanding outdoor recreational pursuits during all seasons of the year. Just 11 km (7 mi) west of Telkwa, Smithers is the regional service centre. Hudson Bay Mountain is the dramatic signature for Smithers. The classically shaped, 2,621m (8,600ft) mountain dominates the town and sets the scene for its alpine theme which many of the stores and businesses have adopted. Red brick sidewalks are pedestrian friendly with places to sit and admire the mountains.

The Hazeltons, there are three – Hazelton, New Hazelton and South Hazelton, are 60 km (45 mi) west of Smithers. The area was named after the hazel bushes covering the region’s river-carved terraces. Mt Rocher DeBoule dominates the landscape with cliffs that tower 1,000m (3,300ft) over the Hazelton communities. Sitting in an area steeped in First Nations’ culture and heritage, it is hard to miss the totem poles in the area.

Terrace, 210 km (130 mi) west of Smithers, is a bustling, mountain-ringed city with a white bear as its local symbol. The protected Kermodei (“spirit bear”) bear has fur ranging from blonde to white and still roams isolated valleys and coastal islands. Sightings are extremely rare. Much more common are the huge salmon caught along the Skeena and nearby tributary streams.

North of Terrace is the amazing beauty of the Nass Valley. The Nass River Valley was formed by molten lava traveling to the Pacific Ocean. It’s 26 km (16 mi) long lava beds can be found in the Nisga’a Memorial Lava Bed Park, and totem poles, Nisga’a art, and more are throughout the valley and in the four villages of New Aiyansh, Canyon City, Greenville and Kincolith which has amazing seafood.

Depart from Terrace and marvel at the incredible scenery as the highway winds 146 km (91 mi) along the Skeena River until reaching Prince Rupert. This city lies at the heart of the traditional territory of the Tsimshian First Nation and is bordered by the traditional lands of the Gitxsan, Nisga’a, Haida and Heiltsuk people. The city remains a centre for commerce and transportation, a meeting point for British Columbia and Alaska ferries, terminus of the Haida Gwaii ferry, and the place where the Yellowhead Highway and rail meet the sea. Today visitors come to this cosmopolitan city to experience 10,000 years of living culture, world-class sport fishing, or spectacular wildlife viewing. 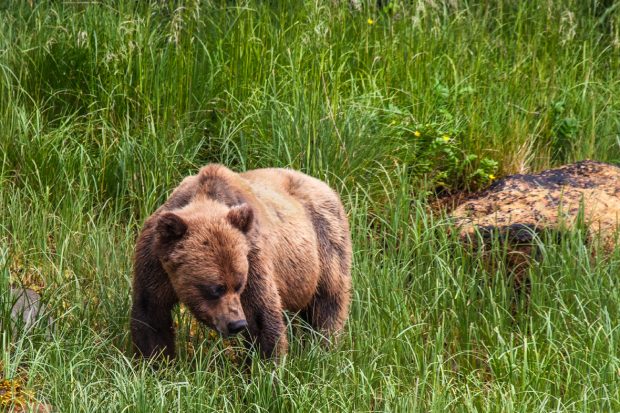 Throughout Prince Rupert, visitors will see how nature plays a vital role in life on the Northwest Coast. This is Canada’s northern rainforest. Eagles and gulls are a common sight, and deer wander freely through local streets and gardens. Spending a quiet moment watching the boats along the waterfront is often rewarded by a glimpse of a harbor seal, or one of the many species of seabirds, and on rare occasions even humpback or killer whales.

The Yellowhead Highway 16 continues on Graham Island, Haida Gwaii. Please refer to the Haida Gwaii sub-region for a description of the area surrounding this portion of the highway.

Explore the Communities of Yellowhead Highway 16